Tom Hicks wouldn’t describe himself as a psychogeographer, and he’s unsure of the label photographer too, when we meet to discuss his Instagram project BlackCountryType.

But he is, instinctively, both. A photographer immersed in the feel of the Black Country, the ‘lostness’ of the place: recording mysteries behind locked gates, the eloquence of battered shopfronts.

BlackCountryType is one of a new breed of social media accounts featuring typography and signage.

On Instagram you’ll also find ShopFrontElegy, the LaundretteAppreciationClub, MrGhostSigns, and StreetMath, all posting images of everyday signage past and present.

It’s no surprise to learn that Tom’s day job is as the arts librarian at the University of Wolverhampton. He has a love of archives and an innate sense of their importance, particularly for a region with a vanishing history.

Tom takes pictures of shop signs, municipal signs… doorways and arches, gates and graffiti. It’s as if his Instagram account is itself an archive of what he encounters every day. 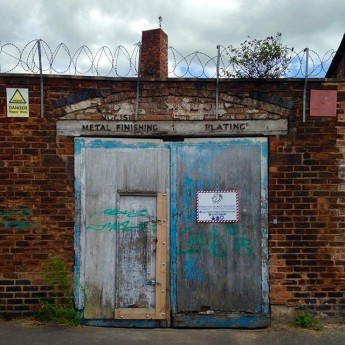 He elaborates: ‘I think it’s important to record things that are disappearing. You get a lot of that in the Black Country. I’ve always been a fan of signage and old advertising. Increasingly you find shop signs represent things that are dying.

‘The first couple of pictures I took in this series, the buildings have gone now. Others are just transitory, appearing and then disappearing, covered up by new signs.’

Psychogeography was a movement started by Guy Debord, the Marxist theorist who channelled surrealism into a critique of capitalism. Along the way, the avant-garde Situationist International collective began exploring the built environment, looking afresh at urban spaces and how we navigate them.

Tom wouldn’t want to be called a flâneur, I sense, but he sees an inherent value in documenting urban spaces, and considering how we are affected by our surroundings.

‘There is a psychogeographical aspect to what I do. You get a feeling about the places you document, and you also glimpse the past.

‘In the past signage was as varied and individual as fairground art and canal boat art: there was a handmade quality to it, an effort that’s completely absent in this generation of computer-based signage. 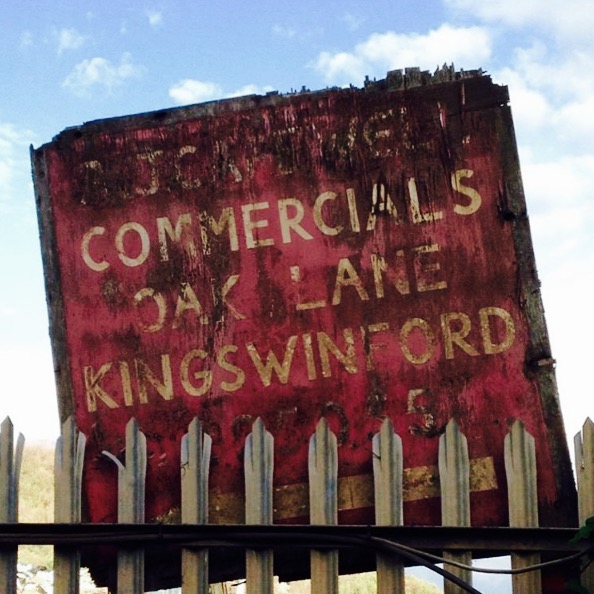 ‘These days, whole town identities are disappearing. You could be anywhere.’

And here, he gets to the crux, perhaps, of what is so unsettling about the Black Country, an area once proud of what it was, a powerhouse of industry.

What is it now? And how is that reflected in the shop signs, the evidence on every high street that small businesses are going under, boarded up, replaced by chains and charity stores?

One of Tom’s favourite photographs is of Jupiter Drycleaning.

Interest is growing in BlackCountryType, and people ask Tom why he takes the pictures he does.

‘A building may be quite ordinary to look at, but one part of it is really interesting.  And of course, people add their own marks on places.

‘I get a lot of messages. People send BlackCountryType things they’ve discovered. There’s a whole movement, and you get mad subsections, like photos of Chinese restaurants. People have produced books on what they’ve done.

‘Years ago I took a series of photographs on doors and gates around Wolverhampton. They showed how a lot of the area is locked up. You don’t even know who owns the building or land. It was a comment on what is hidden away.’

Would Tom bring a book out?

‘Perhaps. A book and an exhibition, maybe.’

He started with two prerequisites – the photos must be set in the Black Country and the signs must feature typography – but he’s increasingly interested in the design element too:

‘There’s a door I found recently, with a design that in itself is saying something. It’s very intricate, and yet it’s just tucked away in a corner of Cradley Heath. Totally hidden.’

How many more overgrown corners are harbouring these treasures? What is the impulse to seek them out?

‘The core of the Black Country is completely industrialised, so people are looking for an aesthetic in the built environment, rather than, say, nature.

‘That door in Cradley Heath may once have been a centrepiece, something to be proud of. These places have gone, and they’ve been replaced by supermarkets and garages.’

A social media movement of this ‘type’ is as much about looking at the past through the lens of the present as it is about mourning what is lost.

‘If you have an interest in street typography you’re celebrating what’s around us, and what we can recover. There’s a resurgence of interest in handwritten graphics and typography. Students and graphic designers are looking to the past, which has always been the way.’

To view more of Tom’s work check out BlackCountryType on Instagram.