The first time my daughter went to the beach was in the summer of 2003. I have a picture of her as a toddler playing in the sand. There are colourful beach umbrellas and inflatable slides. There may well have been deckchairs. More unusually, in the background you can see grass and trees – because this was Hickman Park in Bilston, and the sand had been brought in by lorry from Southport.

That was just a few months after we moved to Wolverhampton from London, so I imagine we were still finding our way around. I’m sure we’d already found our local library, which was only a ten-minute walk from home, even with a toddler. We’d take the shortcut down the alleyway next to the Oxley Moor Hotel – a pub that has since closed and been turned into a One Stop supermarket. Sadly, Oxley Library is no longer there either, and the building, which the council promised to put to ‘better use’, has been boarded up since 2009.

In 2003 though, we were regular visitors. My daughter would look at every single picture book in there before choosing the ten she was allowed to take out. A few favourites came home with us several times a year: Hamish the Highland Cow (who hated hairdressers) by Natalie Russell, I Love You, Blue Kangaroo! by Emma Chichester Clark and Cockatoos by Quentin Blake, which must have been renewed more times than any other book in the library. 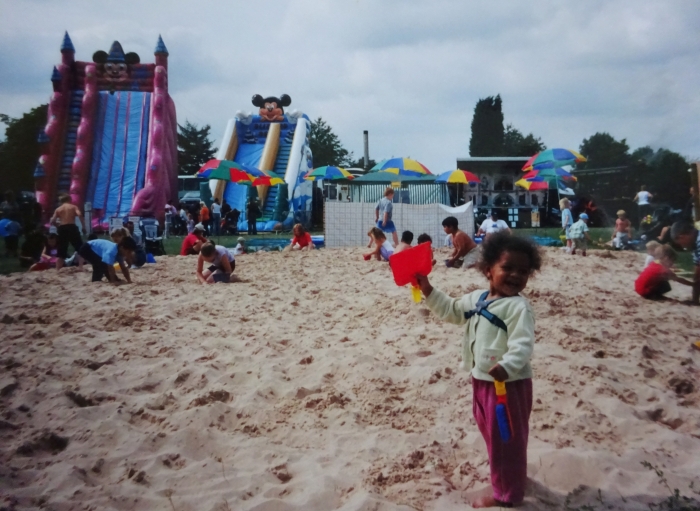 A few months after our outing to Bilston by the Sea, my daughter started going to a day nursery just behind the library. Sunflowers was run by a woman called June, although of course the local staff pronounced it ‘Jewun’. My own kids picked up the Wolverhampton accent at nursery, but not the hinged vowels. Years later, my daughter told me that her primary school teacher didn’t comment when children said ‘ballewun’ for ‘balloon’, or ‘soowun’ for ‘soon’, but he drew the line at ‘kewub’ for ‘cube’. The nursery staff also introduced me to ‘a luv’ (cuddle) and ‘a poorly’, and taught me that wet paper towels are a magic cure for everything from a grazed knee to a headache (as in ‘Have you got a poorly? Come here and give us a luv and I’ll get you a wet paper towel’).

June/Jewun fell in love with the man who came to the nursery to deal with a rat problem. Soon afterwards, she left and followed him back to Scotland. Now, whenever I pass that nursery, I’m reminded of another favourite picture book: The Pied Piper of Hamelin.

Just as my daughter had her first seaside experience in Bilston, my son got his first taste of France at the Newhampton Arts Centre on Dunkley Street. This was where we saw The Man who Planted Trees – a show that transported us to Provence with lavender breezes (helped along by a fan) and a fine misting of rain from a spray bottle.

Our first real trip to France several years later was not to the lavender fields of Provence, but to Paris. Both children wanted to see the ‘Thinker’ statue in the Rodin Museum because their teacher (the one who drew the line at ‘kewub’) would say ‘Rodin’ to stop his class chattering and get them to strike a ‘Thinker’ pose instead. While there, we discovered that Paris, like Bilston, has its own beach: every summer, truckloads of sand are brought in to create ‘Paris-Plages’ along the Seine.

It is in fact over 100 miles from Paris to the sea – about the same distance as it is from Bilston to Southport.

Ros Woolner lives in Wolverhampton and is a member of several local writing groups. Her poems have appeared in Magma, The Interpreter’s House and Under the Radar and in a number of anthologies, including The Poetry of the Black Country (published by Offa’s Press), and her story ‘Make a Wish’ was included in Ripening, the National Flash-Fiction Day 2018 anthology. Her poetry pamphlet On the Wing was published by Offa’s Press in 2018.

Ros is a Room 204 writer with Writing West Midlands.