Dad was a proper tea drinker.  A giant mug, the bigger the better, two sugars and just enough milk. His mug said ‘World’s Worst DIYer’… it made me smile.

He was 67 years old. Diagnosed with liver and lung cancer just before he’d buried his youngest sister, Mandy, now he was dying, too.  The greatest man in the world, the strongest man in my world.

We’d been told that Dad had less than two days to live. We had a choice: we could either take him home and give him around the clock care, or he could die in hospital.  We decided that we were going to take him home.

We set up Dad’s settee in the spare room and the hospital bed and oxygen in the living room.  We put the TV on and tried to make the place as cozy as possible for him.

My brother John came in with an old newspaper clipping from the local paper. It bore the headline When Bells Rang and People Sang.

‘You see the young, blonde lad sitting at the front, facing the camera? There’s a little girl and a dog right next to him…’

‘That’s Dad as a little boy. He’d have been three, coming four, and the girl sitting behind him is Aunty Brenda.’

‘Yes, she is on the left-hand side to the woman holding the child.’

‘She’s smiling.’ I said. ‘It looks like a happy day.’  And then I cried. John put a hand on my shoulder.

Dad was in and out of consciousness and when he woke up, he was confused.  He said that he could see his Mom and Dad and he wondered why the TV and wall unit were in his mother’s living room.

‘Ang? What are you doing here?’

‘I’m helping to look after you.’

He didn’t reply to that.  Maybe he knew more that he was letting on.

‘Dad, do you remember when this was taken?’

I handed him the newspaper clipping. 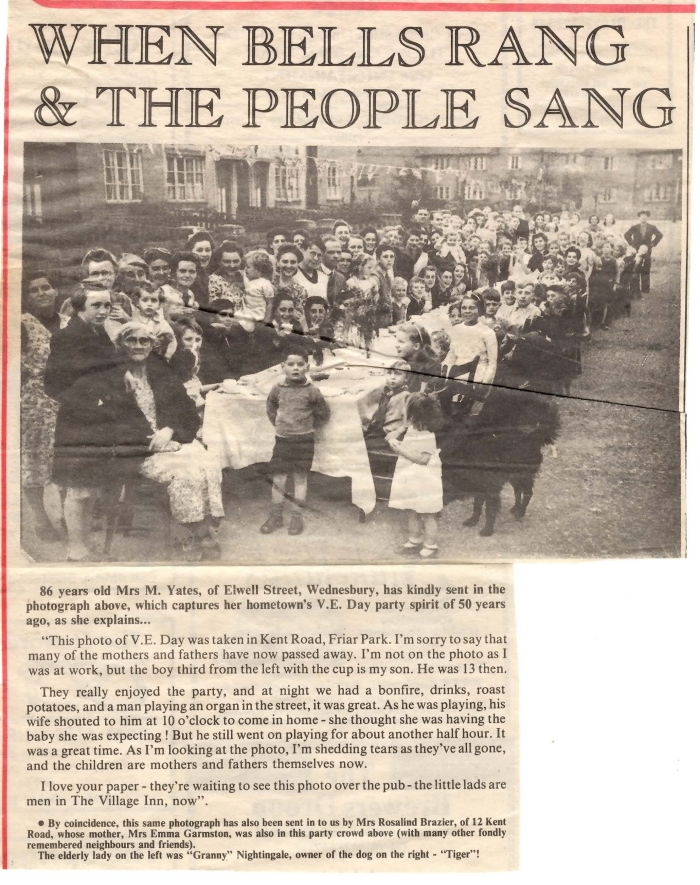 Quietly and between breaths, he said, ‘Mom was in the kitchen making jellies, red ones, and sandwiches. The back door was open, as it often was in those days when we were friends with everyone. Your Nan was such a lovely woman.  If ever there was a problem in the street, someone would say, “Go and fetch Mrs Garratt.” Oooh, you do look just like her, gal, you got the Garratt nose.

‘I remember being told to sit down and behave. I didn’t know what was going on. I was too young, but I remember everyone was happy.’

Dad sighed and rattled a cough. ‘We had to sit like that for ages while the man took the photo… ‘Put the fire on, gal. It’s getting cold in ‘ere.’

I did as I was asked and Dad closed his eyes and went to sleep with the newspaper clipping still in his hands. I held his hand and I didn’t know whether he could hear me, but I said, ‘I love you Dad and I am so proud to be your daughter.’  I repeated it over and over and he squeezed my hand to let me know he could hear me and then he let go.

Angela Garratt is the founder and leader of the Oldbury Writing Group (O.W.G), est. 2014. She is a published writer and performance poet.  She also runs a poetry night at her local pub in Rowley Regis.  Her other interests are wildlife photography, history, art and music. Angela is currently studying for a combined BA Hons Degree in English Literature and Creative Writing through the Open University.  To find out more about Angela and the Oldbury Writing Group please visit: